When Muhammad Ali, the legendary world heavyweight boxing champion, was asked by reporters why he kept boasting about being the greatest in the ring, he used to say, “It isn’t bragging if you can back it up.”

The MBDA FY2011 Annual Performance Report (APR) backs up what we’ve been saying about MBDA’s achievements under President Obama. In 2011, we registered the best performance in our 43-year history. It was our third record-breaking year in a row.

The recently released APR presents detailed information about the contracts and capital MBDA helped obtain for minority-owned businesses, along with the number of new jobs created. It also highlights our strategic and organizational accomplishments.

Let me give you just a few of those highlights.

Despite the serious head winds the economy is facing, more than 5,780 new jobs were created by minority-owned firms working with MBDA and its network of MBDA Business Centers in FY 2011.  MBDA assisted minority-owned businesses in obtaining access to nearly $4 billion in contracts and capital.

During the first three years of the Obama Administration, 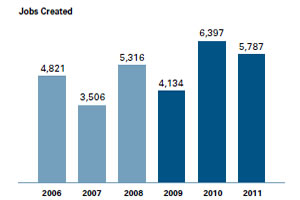 MBDA facilitated a total of more than 16,300 new jobs, an increase of 20% over the prior three-year period.

MBDA directly served more than 17,400 minority-owned businesses and indirectly served thousands more, a 36% increase over the prior three-year period.

And MBDA achieved a Return on taxpayer Investment (ROI) between 102x and 130x, an impressive 86% increase over the prior three-year period.

MBDA’s FY2011 APR also presents a state-by-state detailed analysis of the performance of minority-owned businesses broken down by industry.

From day one, the Obama administration has been focused on getting the American people back to work.  The FY2011 APR shows that MBDA heeded this call to action by continuing to help minority-owned firms create thousands of jobs in the last year alone by providing minority-owned firms with MBDA and Commerce tools vital for creating jobs and strengthening the economy.

MBDA expanded its footprint of business centers to several new locations over the past couple of years, including: Anchorage, Boston, Cleveland, Denver, and Memphis. Following the redesign of its business center program, the Agency expanded the portfolio of services provided by MBDA Business Centers to include export-readiness, mergers & acquisitions, and alternative financing. The Agency also launched its first specialty business center—the Federal Procurement Center—designed to increase government contracting with minority-owned firms.

More details about the MBDA’s performance can be found in the full report on the Agency’s website at www.mbda.gov/budget-performance.

The Obama Administration recently announced a competition to promote American innovation, foster entrepreneurship, and increase the commercialization of ideas into viable companies.

The i6 Challenge is a multi-agency competition led by the U.S. Department of Commerce, Economic Development Administration's Office of Innovation and Entrepreneurship.

Six winning teams will be awarded up to $1 million each for innovative proposals to create and expand what are called “Proof of Concept Centers.” These centers will incorporate a range of services that are critical to regional economic growth and job creation-- from technology and market evaluation, business planning and mentorship, to early-stage access to capital.

Over the past two years, the i6 Challenge has provided $18 million to 12 winners across the United States to create their own centers for innovation and entrepreneurship.

The application deadline is July 20, 2012. Details are available here: http://www.eda.gov/challenges/i6/

U.S. Travel and Tourism are Booming – So Are Opportunities for MBEs

Did you know that tourism and travel is the U.S. number one services export?

In fact, travel and tourism is one of the most important engines of our economy, and it’s expected to keep growing at an average of 4.5 percent annually over the next five years.

That’s good news for minority entrepreneurs looking for growth opportunities. The even better news is that MBDA and the Commerce Department have resources to help you get started.

In January 2012, President Obama signed an Executive Order and announced new administrative initiatives to significantly increase travel and tourism in the United States.  Among those initiatives are websites, like the Commerce Department’s International Trade Administration Office of Travel and Tourism Industries where you can find export assistance services for travel and tourism industry suppliers.

The Commerce Department has several other websites where you can find help in attaining your international goals and assistance with: