U.S. Demographics Are Key To Our Economic Destiny

This year for the first time, the United States served as an official partner country of the world’s largest industrial trade fair, Hannover-Messe. Along with President Barack Obama and U.S. Department of Commerce Secretary Penny Pritzker, I accompanied a delegation of American minority entrepreneurs to Germany.

Within hours of the fair’s opening, it was evident that we had stepped into a time portal that zipped us into the future of the global industrial economy. The fair’s theme, “Integrated Industry—Discovery Solutions,” only hinted at the amazing innovation-driven universe that we ultimately encountered at the trade expo. I witnessed the connective tissue of a vast, powerful technological framework taking shape—the Internet of Things (IoT)—and sensed that we were at the threshold of a major seismic shift in global industries, an unprecedented period of technological advancement. A new world of Artificial Intelligence (AI), advanced manufacturing, Big Data, and sensors is remaking entire industries at a breakneck pace.

Undoubtedly, this unfolding realm of innovations, created in part by U.S. entrepreneurs, holds a range of implications for America’s business community, and for our overall economic health. It isn’t yet possible to have absolute clarity on the full long-term impact. However, these innovations already are providing clues to some experts who are developing predictions informed by historic knowledge and contemporary data. 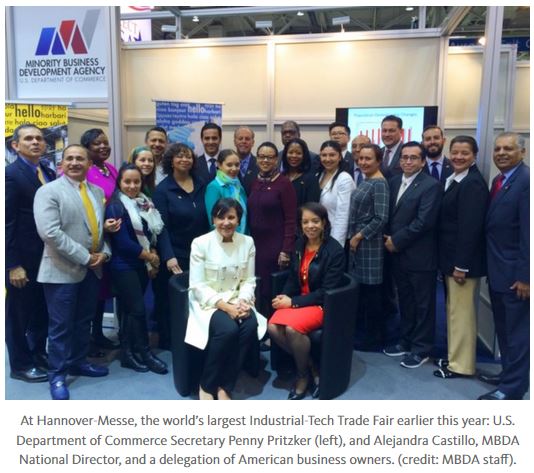 One school of thought holds that the rapid automation of manufacturing and production systems signals a major workforce reduction. Darrell M. West of the Brookings Institution warns that the shift will impact millions globally, as AI, and other iterations of advanced manufacturing and distribution displaces massive numbers of workers.

On the other hand, some technologists envision a different kind of industrial growth that includes positive new opportunities for entrepreneurs and workers alike. During a May 2016 interview with Fareed Zakari of CNN, Reid Hoffman, LinkedIn’s founder, said he anticipates that entire new sectors and occupations will sprout from the rise of IoT. The formation of entirely new businesses will in turn “create interesting jobs,” Hoffman said. While the concerns of West and other futurists about increased unemployment caused by IoT and robotics are legitimate, my perspective more closely tracks Hoffman’s glass half-full scenario—though with a twist.

For three years I’ve led the Minority Business Development Agency (MBDA) at the U.S. Department of Commerce, the only federal agency that focuses on strengthening minority-owned enterprises (MBEs). During my time at Commerce, the nation’s Innovation and Data agency, I’ve learned that the best way for the United States to realize the full economic benefits of this powerful industrial transformation is by building a 21st Century economy that is willing and capable of engaging more women and minorities within the innovation ecosystem—and not just from a workforce development or consumer perspective, but as creators, founders, and owners.

As generators of jobs and wealth in their communities and nationwide, and as creators of next-generation companies, the entrepreneurs in our ‘majority-minority’ nation have potential to represent, to a notable extent, the future of America’s healthy economy.

This is not just wishful thinking.

This premise is based on demographic data and global and domestic economic data from fellow Commerce agencies—the Census Bureau and the Economic Development Administration (EDA), and the Small Business Administration (SBA), as well as from academic researchers. For example, the United States is home to 8 million MBEs, up from 5.8 million, a 38.1 percent increase from 2007, according to the 2012 Survey of Business Owner’s report. Receipts for minority-owned firms climbed from $1.0 trillion to $1.4 trillion during the 2007–2012 period (34.7 percent).

Commerce Department data also shows that MBEs are more likely to export than non-MBE companies, according to the U.S Census Bureau’s 2012 SBO’s Special Report on Ownership Characteristics of Classifiable U.S. Exporting Firms, which reviewed 2007 data. These data-sets, in particular the explosive rate of growth of minority entrepreneurs and MBEs between 2007 and 2012, represents a strong rationale for increased investment in their sustainability.

Yet despite the dramatic demographic changes driving their growth, MBEs are not, to date, major players in the supply chain of these new technological opportunities. The escalating U.S. population and global demographic changes makes the case for why they should be—and for why an inclusive innovation ecosystem in which MBEs are able to fully engage in the creation, manufacturing and management of these amazing new products and systems is imperative.

A 2015 McKinsey & Company study gives clues as to why: the economics and management research and consulting firm analyzed nine IoT categories, including factories, vehicles, and cities, among other pillar environments; McKinsey estimated the total economic impact of new applications of products and services will be between $4 trillion to $11 trillion by the year 2025.

The economic gains taking place within IoT-affected industries are accompanied by another fast-moving tectonic shift: population demographic changes that are rapidly altering consumer markets and production trends in the United States and abroad.

Pro-actively, the United States must build an inclusive innovation ecosystem of entrepreneurs that can navigate and excel along the parallel tracks of these two major shifts: new populations creating and leveraging IoT-driven industrial reinventions and those who can be critical supporters of global supply chains in an innovation-driven economy.

Doing so will mean increased productivity, reducing income inequality, and creating greater social and upward financial mobility in communities that historically have been economically isolated, according to a 2015 report by the Brookings Institution.

These parallel shifts—an increasingly ethnically-diverse U.S. population, and the rapidly- transforming tech and STEM-oriented industries—present a wealth of opportunities for all American companies, including MBEs, if we are bold, creative, and pro-active enough to seize them. And it is especially urgent for our future economic health that MBEs, especially, can fully access the pipelines of creation and ownership in IoT sectors.

Since 2008, coinciding with the increase in the U.S.’s minority populations, more objects than people have been connected to the Internet through ‘smart’ devices. This year alone, there will be, by some estimates, 4.9 billion objects connected. This figure is expected to balloon to 50 billion by 2020. For America to stay competitive worldwide in this century and beyond, the creators and owners of these devices and services must include robust numbers of MBEs.

There are several factors unique to MBEs that make many of them particularly suited for innovation environments and for shaping the on-rushing tsunami of inner-connected systems. MBEs are organic disruptors. They are adaptable, and create multiplier-effects of job gains and positive community mobility, according to Michael S. Barr, a former U.S. Treasury Department official who studied the topic for The Hamilton Project at the Brookings Institution.

These traits translate into competitive advantages in business environments, and position MBEs to succeed in the innovation ecosystem. Consider that the emergence of blockchain technology, 3D Printing (3DP), advanced manufacturing, and other innovations are creating decentralized production models comprised of small or mid-sized companies, a size designation that skews heavily toward MBEs.

According to Magnus Rentzhog, Senior Advisor of the Swedish Board of Trade, 21st Century manufacturers and related supply-chains are increasingly defined by their ability to achieve quick technological adaptability, and nimble responsiveness to market needs. The 19th Century fixture of quarter mile-long manufacturing or assembly plants like those that once dotted the American Midwest are fast disappearing.

In a recent article published by the World Economic Forum, Rentzhog wrote, “…3DP will slowly but surely transform manufacturing from large, centralized production facilities that are hierarchically managed to smaller, individual or cooperative-type operations.”

The decentralized, technologically advanced manufacturing environment outlined by Rentzhog offers significant opportunities for small and medium-sized businesses, including MBEs. As technological innovations continue remaking entire aspects of manufacturing, the decentralization of systems can benefit entrepreneurs by eliminating the need for large-scale brick-and-mortar plants and high-cost infrastructure.

Looking at these factors, along with the nearly unlimited potential of commercial applications that comprise the IoT, reinforces my sense of urgency that STEM-oriented MBEs must play a key role in this fast-moving tech ecosystem. Further, an inclusive innovation ecosystem recognizes that minorities are far more than just consumers and users of products and services. And due to the increasingly urgent need for nimbleness, dynamism, and technological flexibility within our industrial sectors, America’s MBEs are uniquely well-positioned to play an essential role in the IoT, not just as members of the workforce, but, importantly, as founders and owners.

Our particular demographic make-up gives us a critical competitive advantage: Data from our U.S. Census Bureau shows that America will be a ‘majority-minority’ nation by 2044. Our current economic footprint includes 8 million MBEs, which means that we hold the potential to greatly increase our global competitive advantage by unleashing the energies and creative acumen of minority entrepreneurs and founders.

While I envision a future of increased prosperity and wealth that is fueled significantly by minority communities, the reality is that MBEs, particularly those with STEM-based models of the sort that are swiftly remaking industries, face a host of challenges, including limited access to capital and R&D.

Policy, economic, and cultural solutions are needed in order to short-circuit long-standing impediments to MBEs. Without the full inclusion of minority entrepreneurs within the IoT and other components of the evolving ecosystem, existing disparities in employment, education, healthcare and income that presently characterizes America’s population will only increase.

At MBDA, we are deeply engaged in efforts to moving technological-based MBEs into leading-edge industries. Since our founding by Executive Order in 1969, MBDA has pushed forward the second aspect of the movement undertaken by Rev. Dr. Martin Luther King, Jr., and other Civil Rights leaders of that era—creating greater economic opportunity through business development. The most stubborn barrier MBEs have faced historically is limited resources, including access to capital, contracts, and markets.

Now, while sectors including construction and retail boast healthy numbers of MBEs, their comparatively low visibility within the growing sphere of companies shaping the IoT is out of proportion to their total numbers, and to their growth potential. This under-representation is due to a lack of access to capital, including reliable institutional lending necessary for R&D, and of limited access to capital for market expansion, acquisition of the equipment, and workforce needed to enter the global supply chain of advance manufacturing.

The historic barriers continue, and they inhibit the ability of many STEM-based MBEs to scale up and achieve sustainability. While institutions from colleges and universities to foundations and corporations have in recent years advocated for increased funding for inclusive STEM education programs in K-12 and above, much more is required in order to leap-frog MBEs into the fast-moving industrial innovation stream. This is why we’ve developed service-oriented solutions designed to more directly support minority entrepreneurs, and speed their inclusion to this ecosystem.

Our Inclusive Innovation Initiative (I-3) is a partnership with the Federal Labs Consortium (FLC), the network of scientific and research institutions that accounts for some $140 billion of the U.S. budget, and which, historically, has sourced game-changing technologies such as GPS. By linking MBEs to the FLC, and by drawing from STEM centers within Historically Black Colleges and Universities (HBCUs) and other Minority Serving Institutions (MSIs), as well as from corporate partners, the I-3 will connect minority-owned companies to developmental and support resources.

The White House’s Lab-to-Market initiative —the tech transfer process of commercializing products and services born in Federal Labs—represents a viable means of short-circuiting several key barriers faced by many MBEs that have solid technology models, but struggle to locate necessary capital and other resources to allow them to achieve sustainability.

The inclusion of MBEs within this expanding technological web, the IoT, is essential for the future of America’s economic health. We hope that industry agrees to partner with government strategically and expeditiously to create an ecosystem in which MBEs can fully contribute to this exciting technological tsunami that is remaking global economies.

At MBDA, we’re now more than ever energized and optimistic about America’s ability to access all of her human capital, and rise to the brave new future of tech-driven prosperity and growth.