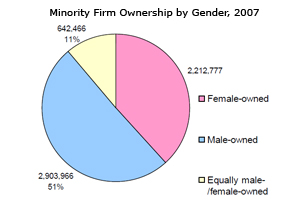 African American female-owned firms grew the fastest than any other group of firms in number of firms by 67%, and in employment by 39 percent. Firms owned by Native Hawaiian and Other Pacific Islander women had the highest increase in gross receipts, with a 90 percent growth during the same period. Asian women-owned firms followed African American women-owned firms with the second fastest growth in number of firms and employment; and Hispanic female-owned firms ranked third in terms of growth in those two business measures during the same period.

If minority-owned businesses would have reached parity in 2007, there would have been 8.1 million minority businesses, instead of 5.8 million. These firms would have generated $3.4 trillions in gross receipts instead of $1 trillion, and would had employed 17.5 million workers instead of 5.8 million. The entrepreneurial parity gap for minority women is even wider as a result of their lower participation rates as business owners. MBDA’s goal is to help grow minority male and female-owned businesses in industries with the potential for size and scale, as well as encourage job creation among these firms.