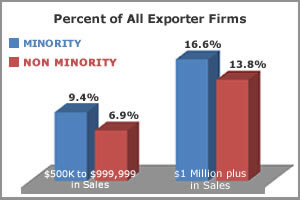 Exporting is good for American business, good for American workers and good for American jobs. Ninety-five percent (95%) of the world’s customers lie outside the United States and Minority Business Development Agency is committed to working with U.S. companies to help American-made goods and services succeed in the global market.

Minority businesses have a competitive advantage in global trade based on their cultural ties, language skills and nimbleness. The 2007 Survey of Business Owners reveals that among firms with export sales representing 20 percent or more of their overall receipts, minority-owned businesses are twice as likely to export compared to non-minority firms. In addition, minority firms are more than three times as likely to have businesses generating 100 percent of all their sales in exports compared to non-minority respondent firms. This finding is quite substantial because it can support the Administration’s goal of doubling the nation’s exports by the end of 2014. Minority businesses can play an important role in meeting that goal through exports.

In a report to the President on the National Export Initiative (NEI) one recommendation included leveraging the vast capabilities of Minority Business Enterprises (MBEs) in exporting. The report confirms MBEs participate at a high rate in global commerce, which provides the U.S. with a unique and compelling opportunity to help increase U.S. exports by MBEs and create sustainable jobs. Between 1997 and 2007, MBEs outpaced nonminority firms in growth of employment, gross receipts, and number of firms. Studies show that MBEs are twice as likely to export as non-minority firms are. In support of NEI, Commerce’s Minority Business Development Agency (MBDA) will work with Trade Promotion Coordinating Committee (TPCC) partner agencies to design outreach and trade facilitation programs specifically geared to MBEs, to increase their participation on international trade missions and to strengthen their links to international trade centers.

The landscape is ripe for minority-owned firms to continue to expand their sales in the global market and to support the President’s National Export Initiative.