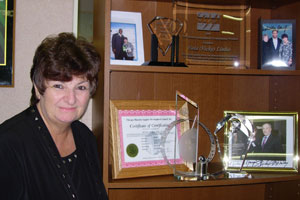 Viola Victoria Linko worked her way up from cleaning offices to CEO in the male-dominated world of steel manufacturing. Better known as Vicky, she and her husband and three children are keeping the legacy alive at the 85-year-old company located in Chicago Heights, Illinois.

After marrying into a family of steel manufacturers, it was only a matter of time before Vicky climbed the corporate ladder to become a dominant figure in the industry. While the oil and rail industries weren’t always readily welcoming to her, she says persistence is her secret weapon. “Offering a good product and perseverance are the keys,” said Vicky, who is president and CEO. “It’s difficult being the woman out front in two of the hardest markets, oil and rail.”

Formerly Funk Forging Company, the operation underwent a name change to Funk Linko, Inc. in 2004 to highlight the family name that has been operating the company since 1925. Vicky has been leading the company for more than 28 years, after marrying into the family in 1967.  Funk Linko is a certified, minority- and woman-owned business.

All three of her children have worked for the company, and her husband, William James Linko, Sr., continues to manage accounts in the oil industry. The founder’s daughter, 93-year-old Hazel, still comes to work every day.  “It keeps her going,” Vicky said. “I think it’s a great thing. There’s no way she would stop coming in.”

Four generations of the privately-owned business have been successful in creating proprietary and patented pole products. Their work can be seen in cities throughout the country including the McDonald’s high-rise poles holding up the golden arches stretching 100 feet above the street. Funk Linko is a leading producer of sign, light poles and steel fabrication for major oil companies, fast food operations, hotels, car dealers, airports and municipalities in the United States and many countries around the world. It also offers custom steel fabrication, structural steel fabrication, and engineering services. 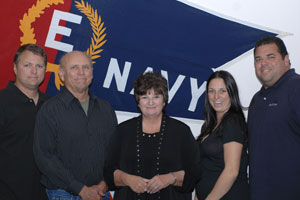 Initially, the company began making framing for smaller signs like those that you’d find swinging at an old gas station. Vicky suggested tapping into work with the oil and hospitality companies, a move that launched Funk Linko into thousands of jobs making sign poles for big names like Marathon Oil Corp., BP PLC and Royal Dutch Shell PLC. From there, the company got involved in the fast foods, hospitals, and airport lighting poles, where things took off.

Vicky’s pride and joy is the work that was done in 1985 at the O’Hare airport – what she likes to refer to as the “forest of poles.” “There was a rehabilitation of the entire airport, and we put up every single light pole on or off the runway, including parking lots and international terminals. “It was over a thousand poles,” Vicky said. “This is still one of my favorites.”

Three years ago, the company was asked by Illinois-based National Railway Equipment Co., whose customers include CSX Corp., Burlington Northern Santa Fe Corp., Union Pacific Corp. and the U.S. Army, whether the small company could build steel locomotive and freight train frames. After some hesitation, Vicky decided to take the chance. Since then the company has built more than 200 locomotive frames, some of which have been shipped overseas to the Caribbean Islands, South America and Saudi Arabia.

On the Road to Recovery

Unlike previous industry challenges and dips in the economy, Vicky said they could always rely on hospitals and school systems to continue building projects. “When things were down and tough, you always had hospitals and schools. Now schools don’t have the big funding authority they used to have.”

“We’ve survived what the oil industry went through in 1983; the impact of the 9-11 terrorist’s attacks, Desert Storm, but this is the hardest. It has taken a lot to move forward.”

Funk Linko is working to fight its way back to its former pinnacle of success when it reached $10 million in sales four years ago. In 2009, the company’s sales were just over $5 million. 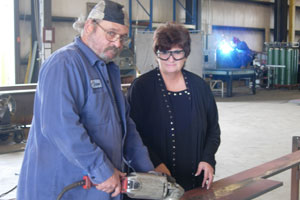 The company currently has 16 employees, three buildings and 70,000 square feet. Vicky plans to build beyond the 32-34 employees the company had when it was in full swing.

Funk Linko has continued to diversify and reach new markets through exporting. “We see great opportunities coming up in 2011.”

Funk Linko is now in talks with one of the rail companies to start a new project in the U.S. that is currently made in China. She added that the opportunity could create 300 new jobs.  “We are trying to see if we can get funding,” she said. “It would be extremely big. We are considering adding 17 and a half acres. China has had a lock on the market. I believe in globalization, but it has got to be a two-way street.”

MBDA has supported Vicky’s efforts. Funk Linko has been a client of the Chicago Minority Business Opportunity Center (MBOC) and the Chicago Minority Business Enterprise Center (MBEC). Vicky was a part of MBDA’s U.S. Delegation of 12 minority-owned firms from various industries including technology, construction, manufacturing and professional services participating in the 2009 China Business Exchange.

During the trip Vicky stated, “In the domestic market you focus solely on your specialty and grow the business one customer at a time. To be a global enterprise you must think broader. This program has helped my company change the way we view our business, our capabilities, and our capacity to access the global marketplace and succeed.”

“MBDA has been a major help,” she said. “It offers a lot of good advice. Sometimes you need somebody to offer expertise to stay focused.”

The company is seeking out new territories globally as well as in the green industry with alternative energy such as vertical wind turbines. Her son, Jim, also has a special passion for connecting the alternative energy concepts back to schools as a teaching tool.

According to her son, plans are in the works to convert the vacant lot across the street from their office building into a facility for wind turbines and a green building.  The company has put up four turbines so far.

Vicky is optimistic about the future of Funk Linko and its expansion plans.

“The passion keeps me going,” Vicky said.  “There is nothing that can’t be achieved if you have the vision and passion to make it happen.”