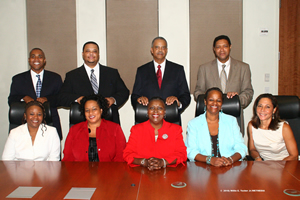 Minority firms partner to win a highly competitive $59 million Department of Commerce grant to provide broadband communication service to a substantial portion of the rural, eight-county region in central Alabama.

A team of African-American owned telecommunication businesses in Atlanta pulled together to win a contract that will not only create jobs, but expand access to services to  communities through broadband connections.

The team made up of primary partners Trillion Communications Corporation, A2D, Inc. and A-Plus Community Solutions competed for the opportunity to increase broadband in unserved and underserved communities.

The partnership’s focus was to provide broadband service to a portion of a rural, eight-county region in central Alabama, an area which includes Selma, through construction of a 2,200 mile network to augment existing facilities. The project would enhance the communities’ ability to bring high-speed telemedicine, distance learning, access to web-based legal assistance, and better 911 services to residents in this region, among other benefits.

“It is really exciting to have a group of minority businesses in Georgia and Alabama win such a large grant,” said MBDA’s Southeastern Regional Director Patricia Hanes.  “This is such an important project bringing economic development and jobs in these challenging times. We are ecstatic that these companies were victorious in their pursuit of funding for this project.”

“Patricia Hanes and MBDA were a great help,” said Ralph E. Brown, CEO of Trillion Communications Corporation, an Alabama-based certified minority-owned business. “MBDA is about creating access, and this was an opportunity to do something positive for the community. We are proud to be a part.”

Trillion Communications will serve as the grant awardee, fiduciary and program manager for the grant released by the U.S. Department of Commerce’s National Telecommunications and Information Administration(NTIA) and the Department of Agriculture Rural Utilities Service (RUS). An additional $25 million will come from private investors.

In addition to creating broadband access, Hanes projects the award opportunity will extend to 25 additional MBEs and service the impacted communities for the next 20 years.

“This will make a difference in the community,” said Brown. “It impacts eight counties, 1,000 businesses and community anchors including public libraries and institutions, HBCUs, 80,000 households, as well as an Indian nation in the Montgomery, Alabama area.”

This partnership includes the three primary partners and the South Central Alabama Broadband Commission – a recently formed consortium of local governments, Historically Black Colleges and Universities, a two-year technical college, medical facilities, municipalities, faith-based organizations, and non-profits and a federally-recognized Indian tribe which together will bring high-capacity broadband to Butler, Conecuh, Crenshaw, Dallas, Escambia, Lowndes, Macon and Wilcox counties in Alabama.  The addition of these services will increase capacity and services available for businesses and residents in the area.

The Trillion team will design, construct and install a next generation broadband infrastructure which will then be transferred to the South Central Alabama Broadband Commission (SCABC), where it will eventually be expanded across the region. A2D Inc. will serve as SCABC’s long-term operator of the eCommunity Broadband Network.

“It’s a historic moment,” said A2D, Inc. CEO Antwon Alsobrook. “We are very excited about our ability through this medium to transform people’s lives in the Southern Black Belt region. We are treating broadband as a requirement not a luxury. We are happy to be a part of making that happen.”

The e-Community Broadband Network will link anchor institutions such as schools, libraries, health care facilities together as well as provide the means for small businesses to expand their markets and help stimulate new business development. It will also enhance public safety services by creating an interoperable network among public safety agencies. For those who can’t afford fee-based broadband services from commercial providers, eCommunity will also enable community organizations, anchor institutions, and governmental agencies to offer free or subsidized intranet-based broadband access directly to vulnerable populations they already serve.

Funding for the project is made possible by the American Recovery and Reinvestment Act signed in 2009 by President Obama, which included approximately $7.2 billion to expand broadband access and adoption in communities across the U.S. It also means an increase in jobs, more investments in technology and infrastructure, and long-term economic benefits.

More information about the broadband initiative, and BTOP, is available at http://www.ntia.doc.gov/broadbandgrants.