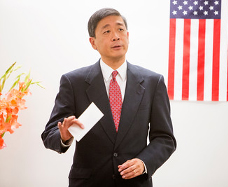 George has over 30 years of experience as a businessman and lawyer in the finance and energy fields. George began his career in private legal practice, including at the law firm of Rosenman & Colin (now known as KMZ Rosenman) where he worked on mergers and acquisitions and corporate finance transactions for large and small corporate clients. George also worked as a banker for over a decade for Capstar Partners, a corporate finance boutique which was acquired by BNP Paribas. At Capstar, George specialized in structured finance transactions for entities of various sizes, from small manufacturers to major international airlines. In his community, George has been active in statewide affairs, having been appointed by Colorado State Treasurer Walker Stapleton to serve on the Treasurer’s Investment Advisory Committee, by Colorado Senate President Kevin Grantham to serve on the Colorado Judicial Performance Commission, by Colorado Secretary of State Scott Gessler to serve on the Secretary’s Advisory Commission on a Uniform Voting System and by Colorado Secretary of State Wayne Williams to serve on the Secretary’s Pilot Election Review Committee. George is also active in his faith community, having served as Chairman of the Board of Trustees at one church and on the Finance Committee of another.