In FY 2010, MBDA experienced the most productive year in the history of the Agency. MBDA created 6,397 new jobs across the nation and saved tens of thousands of existing jobs by helping minority-owned and operated businesses obtain 964 contracts, totaling $1.688 billion, and 522 financial awards, totaling $2.264 billion. 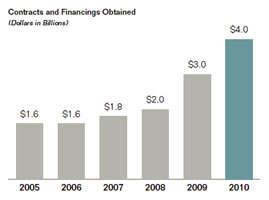 This represents a 51% increase in new jobs created and a 34% increase in contracts and capital to minority-owned firms over 2009 levels. MBDA also increased Return on Investment (ROI) to 125x, up from 102x in 2009 and from 70x at the end of the prior administration. This speaks to the increased operating efficiency of the Agency during this Administration. 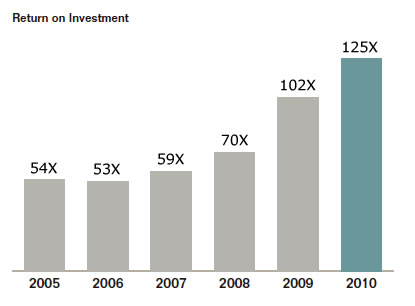 During the first two years of the Obama Administration, MBDA created nearly 11,000 new jobs and helped save tens of thousands of existing jobs by assisting minority-owned and operated firms in obtaining nearly $7 billion in contracts and capital. This represents an annual performance increase of 11% in new jobs created and an 86% increase in contracts and capital obtained over the prior administration, all during the worst economic downturn since the Great Depression.

MBDA collaborated with the White House, U.S. Department of Commerce agencies and other government entities in support of minority-owned businesses. These critically important activities are outlined below:

MBDA represented the Department of Commerce as co-chair of the White House Interagency Taskforce on Small and Minority Business Contracting. This taskforce is a government-wide effort to assist Federal agencies in reaching their small business contracting goal of 23%, while expanding minority business contracting opportunities. The activities of the Taskforce will strengthen existing Federal Acquisition Regulations, training for Contracting Officers and the flow of information about procurement opportunities in support of minority-owned businesses.

MBDA focused on assisting minority-owned firms increase their export activity in support of the President’s National Export Initiative. In addition, the Agency continued to build the infrastructure to institutionalize export support efforts, while pivoting the focus toward maximizing the competitive advantage of minority-owned firms in the global marketplace. 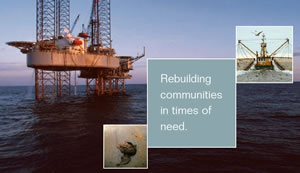 MBDA played an important role in the Commerce Department’s efforts to engage the People’s Republic of China through involvement with the Commerce Department Taskforce on China. MBDA participated in two trade missions to China, one in 2010 and one in 2009, supporting government efforts to increase trade between minority-owned businesses and this very important trading partner.

CommerceConnect is a U.S. Department of Commerce initiative launched by Secretary Gary Locke in October 2009 to make businesses more competitive by bringing all of the Commerce Department’s services together on one platform. MBDA has aggressively supported this initiative from inception by providing senior staff members to assist with the development, structuring and program rollout.

Throughout 2010, MBDA aggressively supported CommerceConnect’s mission from a sole pilot location outside Detroit, through its expansion into a network of centers located around the United States.

Since the first moments of the devastating earthquake in Haiti in January 2010, MBDA has assisted the Obama Administration in Haitian relief efforts by reaching out to the Haitian Diaspora and other minority businesses that could assist with medium to long term reconstruction. As a part of this effort, MBDA joined a trade mission to Haiti and the Dominican Republic to support the creation of relationships between Haitian and American businesses.

In addition, MBDA developed a leading-edge strategy, which was presented to the U.S. Department of State. This innovative strategy was designed to support the rebuilding of the Haitian small and medium-sized business community while creating new jobs.

Since its inception, MBDA has played an integral role in supporting minority-owed firms in American Recovery and Reinvestment Act (ARRA) efforts. These efforts include redirecting over $900,000 in program funding in 2009 to support ARRA efforts on state and local levels. ARRA efforts also included working with key representatives at the federal, state and local government levels to ensure minority businesses receive their fair and equitable share of ARRA contract opportunities.

MBDA continued to support ARRA-related contracting and financing opportunities in 2010 as ARRA activities wound down. MBDA led or participated in 112 of the total 300 federally sponsored ARRA-related events and helped facilitate $150 million in additional ARRA-related contracts for minority-owned firms at the state and local level.