President Obama created the White House Business Council to hear directly from business owners about what the Administration can do more of – or less of – to help create jobs; and to ensure that businesses are aware of the programs and resources that can help their companies grow. That’s exactly what occurred last week at the White House Business Council Forum on Business in Indian Country. The Forum brought Native American and Alaska Native business owners together with non-profit Indian Country support organizations to discuss ideas that can lead to job creation and economic expansion. We were proud to have the participation of Acting Secretary of Commerce, Dr. Rebecca Blank, who listened and responded candidly to a number of concerns, suggestions and feedback.

Overall, the day’s dialogue centered around three core challenges—preparing and retaining future leaders and entrepreneurs; raising capital for emerging businesses; and finding domestic and international markets for tribal commodities such as natural resources and agricultural products.

Preparing the next generation of entrepreneurs and tribal leaders is vital for economic growth in Indian Country. Seeing Native American college students through to graduation, and having good-paying jobs for them when they return home was a challenge expressed by several Forum participants. Lack of opportunities for young adults can, and does result in the permanent loss of college graduates in Indian Country. Ironically, corporate America has expressed difficulty finding qualified interns and management trainees. The discussion quickly turned to a series of best practices shared among participants and a recommendation to develop a National Internship Program to serve as a clearinghouse for Native American and Alaska Native students.

In 2011, angel investors gave $22.5 billion, but only 7% of the entrepreneurs applying for these funds were minorities. This represents a clear under utilization of angel investor funds by minority entrepreneurs and an angel investor representative was on-hand to add to the discussion. There are a number of creative angel investor financing solutions open to Native American and Alaska Native entrepreneurs, as well as tribal governments who stand to benefit from becoming investors. The advantage of the National Minority Angel Network model is that investors/tribes choose their investments, which gives Native American and Alaska Native investors the opportunity to put their dollars back into Indian Country. 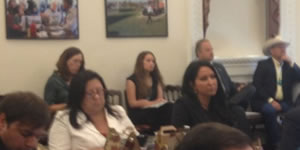 Agriculture and natural resources are large commodities in Indian Country but it is often difficult finding markets, as competition from major food producers limits their ability to get shelf space in national grocery chains. Travel and tourism is another export sector with huge growth potential in Indian Country. While the President’s National Export Initiative looks to exports as a key for economic expansion, very few forum participants have ventured into global markets. A State Department official, Reta Jo Lewis, Special Representative, Global Intergovernmental Affairs, provided expert guidance on business expansion through exporting and challenged Forum participants to “make the Federal Government do its job" by preparing minority businesses for exporting as a means to increased revenue, expansion and job creation. Among her suggestions were: 1. Join overseas trade missions and seek an audience with foreign delegations that travel to America; and 2. Work with the Department of Commerce, State Department, and International Trade Administration and use the vast resources they provide. This engaging discussion ultimately led to the concept of creating an Indian Country Natural Resources and Global Business Council for the purposes of working together to maximize global and natural resource opportunities available to companies and tribal nations.

The participation of White House senior officials from the U.S. Departments of Commerce, State, Interior, Energy, and the Small Business Administration, enhanced the Forum’s solution driven dialogue and encouraged collaboration from all participants. The Native American and Alaska Native participants agreed to share the ideas from the meeting with their tribal governments before the next Forum.

Visit the Minority Business Development Agency website for more information about Native American and Alaska Native Businesses in the U.S.