Over the last 9 years, minority-and woman-owned business Combustion Associates Inc. (CAI) has significantly grown their business from a small domestic operation to one that generates the majority of its revenue from exports to sub-Saharan Africa, using financing from the Export-Import Bank of the United States (EXIM).

“We are part of the American dream of owning a business, being entrepreneurial and creating American jobs,” said Kusum Kavia, President of CAI.

Kusum and her husband Mukund were born in Kenya, raised in England, and immigrated to the United States, founding CAI in Corona, California 26 years ago. Beginning as environmental consultants, they moved on to engineering, manufacturing and installing their electrical power equipment and auxiliary systems.

Since utilizing EXIM to help finance their exports, the company has thrived, nearly doubling its workforce from 35 to 65 new employees. They are expanding their sales into Nigeria, Cameroon, Ghana, Benin and other parts of Africa as a direct result of EXIM support. CAI currently uses an EXIM credit insurance policy in order to eliminate the risk of nonpayment by foreign customers.

“EXIM gives CAI a huge competitive advantage in sub-Saharan Africa where we compete daily with Asian competitors. We’re grateful to have the many resources that EXIM Bank readily provides to our small business,” said Kusum. “Although the need for CAI’s power generation systems in sub-Saharan Africa is very high, we would not export there without EXIM’s support. We consider EXIM Bank our safety net to protect and provide payment assurance.”

Kusum’s success has not gone unnoticed—her story was highlighted by President Obama during the August 2014 U.S.-Africa Business Forum and she now serves as a member of EXIM Bank’s Advisory Committee, a group of customers and stakeholders that advises EXIM on its service, operations, and competitiveness. 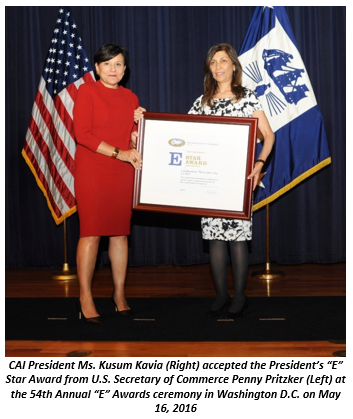 Additionally, CAI has received numerous awards including the U.S. President’s ‘E’ Award for excellence in exporting, and the 2016 Export Achievement Award presented at the 90th Annual World Trade Week in Los Angeles.

Later this year, Kusum will meet with leaders in business and policy to present a paper on CAI’s 80 MW power plant project in Benin, West Africa, which was built with the help of EXIM Bank, at the prestigious Power-Gen Africa conference in July.

Since 2009, EXIM has authorized more loans to help grow minority- and women-owned businesses than it did over the previous sixteen years combined - making it the fastest growing sector in the Bank's small business portfolio.

The Bank also has a business development team devoted to minority and woman-owned businesses (MWOB) which works exclusively with these businesses. They provide hands-on guidance to small businesses and MWOB’s that wish to export and learn how to qualify for and access EXIM financing.

To find out more about EXIM Bank financing and its Minority-owned and Women-owned Business Group click here.

EXIM is an independent federal agency that supports and maintains U.S. jobs by filling gaps in private export financing at no cost to American taxpayers. The Bank provides a variety of financing mechanisms, including working capital guarantees and export credit insurance, to promote the sale of U.S. goods and services abroad. Almost ninety percent of its transactions directly serve American small businesses.

In fiscal year 2015, EXIM approved $12.4 billion in total authorizations. These authorizations supported an estimated $17 billion in U.S. export sales, as well as approximately 109,000 American jobs in communities across the country.

Small business exporters can learn how EXIM products can empower them to increase foreign sales by clicking here. For more information about EXIM, visit www.exim.gov.