With the U.S. population poised to shift to ‘majority minority’ status during the next few decades, the topic of inclusive innovation in global high-growth industries took center stage at an MBDA event in Chicago on October 27.

Dubbed “Inclusive Innovation in Action,” the informative event was located at an award-winning Chicago technology incubator, BLUE1647, and drew a mix of entrepreneurs, investors, and community residents. Coinciding with the annual conference of the National Minority Supplier Development Council (NMSDC), and with Minority Enterprise Development Week (MED Week), October 23-27, the afternoon panel focused on information-sharing about MBDA services for entrepreneurs, and engaging examples of successful minority-owned tech enterprises.

The United States is home to more than 8 million minority-owned enterprises (MBEs), but fewer than 15 percent occupy STEM or technology based sectors.

MBDA partnered with a top technology incubator, BLUE1647, to outline strategies and tactics to bring more minority entrepreneurs squarely into the innovation ecosystem of robotics, 3D printing, advanced manufacturing, and other technologies that are changing industries rapidly.

Demetria Gallagher, MBDA Senior Advisor for Policy and Inclusive Innovation, presented compelling data on U.S. demographics, as well as economic statistics via the U.S. Census Bureau and other Federal Government agencies.  Along with Isaac McCoy, MBDA Senior Advisor for Business Development, Gallagher told the gathering that a growing “innovation ecosystem” in minority communities is vital to the continuing health of the U.S. economy in the 21st Century.

Gallagher and Alejandra Y. Castillo, MBDA National Director, spent two years developing a revolutionary program, Inclusive Innovation Initiative (I-3), that will connect MBEs to the Federal Laboratory Consortium for R&D services, as well as opportunities to commercialize products and systems that are developed in our National Labs. 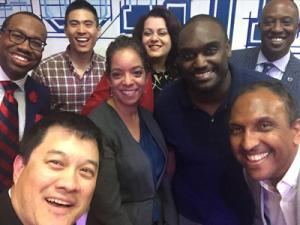 “The Federal government spends about $140 billion dollars annually on R&D – that’s ‘billion’ with a ‘B,” Gallagher said. “We want to make sure that minority entrepreneurs have access.”

MBDA National Director Castillo said, "This is perhaps the most exciting topic that we have addressed at MBDA in quite some time. Let me tell you three things that are happening and you're feeling it because the ground beneath you is shifting: The first is a change in demographics, next we're seeing a change in the industrial base, technology is shifting quicker and quicker. And the third thing we're seeing is globalization. And as minority businesses, we need to look at this, because 95 percent of the world's consumers live outside of the United States."

The I-3 is housed at MBDA, one of 12 agencies and bureaus with the U.S. Department of Commerce. It aligns with President Barack Obama’s, and Commerce Secretary’s focus on encouraging progress in advanced manufacturing and data innovation across American business sectors. The I-3 offers solutions to the stubborn challenges faced by many MBEs with solid tech-based companies or services: access to capital, science, and technical research that will allow them to scale up and reach sustainability, Castillo said.

You can watch the “Inclusive Innovation in Action” event in full here: https://gigity.tv/event/119209