Among our Nation’s fastest growing cities, Atlanta has features that position it as a hub of the burgeoning inclusive innovation ecosystem in the United States. Chief among these features are several renowned institutions of higher learning, including Historically Black Colleges and Universities such as Clark-Atlanta University, Spelman College, and Morehouse College.

A long-time center of Federal research in medical and science via the Centers for Disease Controls and Prevention, Atlanta is also is home to headquarters of top multi-national corporations including Coca-Cola, and Delta among others.

Now, thanks to a new public-private collaboration, these institutions will be joined by the Russell Center for Innovation and Entrepreneurship (RCIE).

The RCIE represents the next phase in Atlanta’s evolution as a leading regional innovation-focused city. Conceived as a vibrant engine of economic prosperity for local and national entrepreneurs, the newly formed nonprofit innovation incubator will be located in the former headquarters of H.J. Russell & Company, a Fortune 500 construction and development enterprise that prides itself on quality work and civic engagement.

The space was donated by the Herman J. Russell family as an additional way of keeping their family patriarch’s legacy alive within the city that he cherished.

Funded in part by a grant from the U.S. Department of Commerce’s Economic Development Agency (EDA), and state economic development funds, the RCIE is designed to spur business creation and business ownership in the heart of the New South.

RCIE will pay homage to the spirit and drive of Herman J. Russell, an Atlanta native and skilled tradesman who, over a period of sixty years, grew his father’s plastering company into a construction and development powerhouse.

The center is located in Castleberry Hill, a historic downtown Atlanta residential and business district that is in strategic proximity to a handful of institutions that will help seed business and innovation within the RCIE: Clark Atlanta University, Morehouse College, Atlanta University Center, Spelman College, and Georgia State University.

The partnership with local universities, as well as with regional businesses, is a core aspect of the RCIE concept: The 40,000 square foot center is slated to support entrepreneurs seeking to create, sustain or grow ideas, products and services into sustainable companies. RCIE’s mission is to foster an innovation ecosystem that supports new business-owners from across sectors, in particular minority-owned enterprises.

“Our vision is that the Russell Center for Innovation & Entrepreneurship will have a meaningful and far-reaching impact on the community by not only spurring on entrepreneurs and visionaries from all walks of life, diverse backgrounds and varying age groups, but also by helping to provide access to the vital elements for success, including an environment that excites collaboration with other like-minded individuals to create innovative products and services that some may never be able to create single-handedly.”—H. Jerome Russell, RCIE Board Member and President, H. J. Russell and Company.

The RCIE will join several innovation incubators that have sprung up across greater Atlanta in recent years—but it is distinct for its combination of public-private funding and operational collaborations, as well as for the history that informs it, said Alejandra Y. Castillo, National Director of the Minority Business Development Agency (MBDA) at the Department of Commerce.

“Atlanta has long been a location where great ideas find room to grow and flourish, from social justice activism that was the foundation of the Civil Rights movement, to economic empowerment initiatives that the state and city prioritize,” said Castillo.

Last summer MBDA—which convened Commerce Department experts and collaborated on facilitating the grants programs and the EDA funding that contributed to the formation of the RCIE—launched the Inclusive Innovation Initiative, known as I-3.

It contains aspects that will be replicated at RCIE, including functional means of connecting entrepreneurs with tech or STEM-oriented products or services to R&D resources via the Federal Labs Consortium.

At RCIE, fledgling business-owners will have access to experts from local HBCUs and other universities, as well as to financial services and business development experts.

The motivation for supporting programs like I-3 and RCIE is clear-cut, and can be replicated in cities nationwide, Castillo said: Pooling public and private resources to establish incubators that serve the entrepreneurial creativity and energies of communities that are filled with hard-working, enterprising residents who can benefit from support early in development stages of building a business. 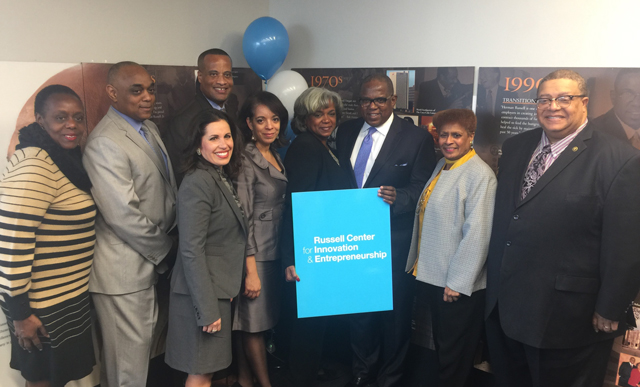 Herman J. Russell’s entrepreneurial journey and legacy is especially relevant to the RCIE’s formation: Russell grew up in a modest home in Atlanta, the son of a plasterer. At age 16, with $125 he’d earned working for his father, he purchased a few acres of land. He built a duplex on the property, and used revenue to pay his college tuition. In the early 1950s, after receiving a degree in construction engineering at Tuskegee Institute in Alabama, he returned to Atlanta and joined his father at work.

In 1952, Russell began expanding the company, taking it from a thriving small business into a large-scale construction and development firm.

The company now is a market leader in construction, development, and property management; its portfolio holds major projects in Atlanta and nationwide, including most recently the Smithsonian National Museum of African-American Culture and History in Washington, D.C.

Herman J. Russell passed away in 2014. His three children—sons Michael, now CEO, and H. Jerome, President, of H.J. Russell & Company, and daughter Donata Russell Ross, CEO of Concessions International, LLC, another company founded by Herman J. Russell—say they’re honored and excited to continue their father’s commitment to civic engagement and economic empowerment. The development of RCIE will be a 21st century expression of the legacy that was started by their grandfather and father in the 20th century.

“As a family, we are honored to be a part of the civic and economic fabric of Atlanta, and we are building on our father’s legacy by creating this lasting civic footprint that inspires and supports entrepreneurs so they too can provide economic opportunities for others,” said H. Jerome Russell.