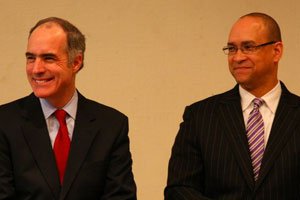 PHILADELPHIA, PA – U.S. Senator Bob Casey (D-PA) joined David Hinson, National Director of the Minority Business Development Agency, to meet with minority business leaders and small business owners from Philadelphia to discuss ways in which Congress and the federal government can stimulate growth of minority businesses in Philadelphia and the Commonwealth. Senator Casey discussed legislation to protect minority and women-owned businesses and help them succeed in creating jobs in Pennsylvania.

“I am pleased to be joined today by Director Hinson as we discuss issues vital to business owners in Philadelphia,” said Senator Casey.  “Especially in the current economic climate, supporting small businesses is vital to our economic recovery.  Today we had a great dialogue on how we can help small and minority-owned businesses by protecting them from fraud and providing support for them to grow and create jobs.”

“I am very appreciative of Senator Casey’s efforts on behalf of the minority business community and his invitation to attend today’s roundtable discussion,” said David Hinson.  “The nation’s minority-owned and operated businesses have demonstrated the potential to lead the way for our nation’s economic recovery and expand our footprint in the global economy. As such it is important that we all work together to create a positive climate in which minority-owned businesses can thrive and compete.”

Senator Casey discussed two pieces of legislation he will reintroduce when the Senate reconvenes. The first will prevent contractors from fraudulently adding minority and women-owned businesses to bids without the intention of following through to deliver work to listed subcontractors. The second would authorize funding for the Minority Business Development Agency to provide technical and procurement assistance to minority-owned businesses.  There are over 2,000 minority and women-owned businesses certified in Pennsylvania.

Currently, prime contractors frequently list minority business enterprises (MBE) or women business enterprises (WBE) as subcontractors on their bids in order to strengthen their applications, at times without the knowledge of the MBE or WBE.  When a contract is awarded, the MBE or WBE are sometimes unaware of their inclusion in the contract and sometimes do not receive the business from that contract.  This bill would:

The second piece of legislation would establish the Minority Business Development Program to provide technical assistance and contracting procurement assistance to help MBEs.  This program will be facilitated by the Minority Business Development Agency (MBDA), under the Department of Commerce, and is the only federal agency specifically committed to minority business economic development.  Specifically, this bill will: