This is an archived site
This site contains information from September 2006 - August 2020. Visit the current MBDA.gov site.
for immediate release 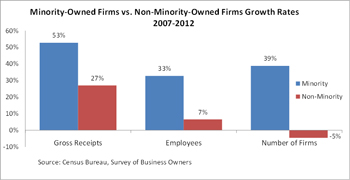 WASHINGTON (August 19, 2015) — The U.S. Census Bureau released preliminary results from the 2012 Survey of Business Owners (SBO)[1] yesterday and minority-owned businesses continue to grow significantly faster than nonminority-owned businesses. The number of minority business enterprises (MBEs) increased 39 percent between 2007 and 2012[2] (from 5.8 million to 8.0 million), or more than three times faster than population growth among minorities. Employment at minority-owned firms increased 33 percent to 7.7 million jobs, while gross receipts were up 53 percent from 2007. In contrast, the number of non-minority firms shrank by five percent between 2007 and 2012.  Employment at nonminority firms increased seven percent, or less than one-fourth as fast as in MBEs and receipts in nonminority firms increased 27 percent or half as fast as in MBEs,

“We are encouraged by the entrepreneurial spirit demonstrated by the growth in number, revenue, and employment of minority firms,” said Alejandra Y. Castillo, MBDA National Director. “However, challenges remain to grow the size of minority firms, underscoring the work that MBDA will continue to champion - strengthening minority-owned firms’ competitiveness and community impact.”

The states of California, Texas, Florida, New York, and Georgia remain the highest numbers of minority-owned businesses. Combined, MBEs in these states make up 59 percent of the national total.

MBDA, www.mbda.gov, is the only Federal agency dedicated to the growth and global competitiveness of U.S. minority-owned businesses. Our programs and services better equip minority-owned firms to create jobs, build scale and capacity, increase revenues and expand regionally, nationally and internationally. Services are provided through a network of MBDA Business Centers. After 45 years of service, MBDA continues to be a dedicated strategic partner to all U.S. minority-owned businesses, committed to providing programs and services that build size, scale and capacity through access to capital, contracts and markets. Follow us on Twitter @usmbda.


[1]
The U.S. Department of Commerce, Census Bureau, Survey of Business Owners (SBO) is conducted every five years. Preliminary data released today is from the 2012 SBO. Growth and increases are based on comparisons to the 2007 SBO, which was published in 2010. Final results will be published in December 2015.

[2] For the 2012 Survey of Business Owners, if a respondent entered a Hispanic or Latino ethnicity in one of the race write-in boxes, the case was categorized as "Some other race"; whereas in the same situation for the 2007 Survey of Business Owners, the case was categorized as "White." This change was incorporated to be consistent with how these write-ins were treated in the 2010 Decennial Census.