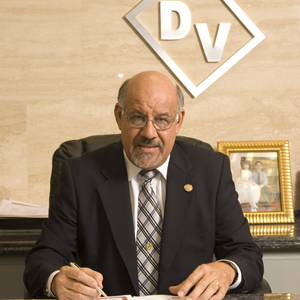 Pablo Del Valle has made it his personal mission to improve the lives of Puerto Ricans through constructing quality projects. Founded in 1988, the Del Valle Group, is a recognized leader in road construction, pavement rehabilitation, bridge construction, marine structures, and buildings and site development.

The Del Valle Group currently has 350 employees and completed more than 197 projects to date. The company’s net worth is more than $878.6 million.

MED Week is an annual event that recognizes minority entrepreneurs’ businesses that contribute significantly to the development and strengthening of the minority business community.

“We are very proud of this achievement, not only on a personal level, but also for all employees who work at the Del Valle Group,” Pablo said. “Several organizations and institutions, such as the Associated General Contractors of America (AGC), AGC Puerto Rico chapter and the Institute of Civil Engineers have recognized this achievement. This award also represents a great honor for the local construction industry and especially for Puerto Rico.”

For more than 30 years, Pablo has excelled in the administration and technical management of major projects for the government and private enterprise, both in Puerto Rico and the Virgin Islands.

His family is deeply involved in the business, including two sons – the eldest is the vice president of the equipment division, and the other son works in the estimating department. His daughter is the general manager of an affiliate company.

Like most companies, the Del Valle Group has not escaped feeling the impact of the U.S. recession. “The economic downturn has impacted the Puerto Rican economy. Currently, we are at 2005 billing levels and the backlog is decreasing rapidly. In addition, the financial sector that normally provides financing for new projects has not committed.”

“We are a company that thrives on planning and problem solving,” he said. “We consider ourselves a company of solutions. We tackle every project (large or small) with a systemic planning approach. This approach has been a successful tool in our business.”

“By virtue of the industry, construction is constantly changing, Pablo said. “We face challenges every day. Perhaps the most challenging project is currently underway, the Port of Americas Project in Ponce, Puerto Rico. It is the largest project we have undertaken with a value of $84.5 million.”

One of the ways that Pablo has kept his company strong is by adapting to industry changes. “We are in constant training through seminars, webinars, dedicated training sessions, and participation in national conventions, such as the AGC national convention. We also keep up-to-date on new industry trends.”

“Throughout the years, we have established a solid foundation as a company that always completes all construction projects on time. Currently, we have the most diversified equipment fleet in the local industry, coupled with a well-motivated experienced work force, that has allowed us to reach this level of performance.”

As far as next steps are concerned, Pablo said the company is broadening its search for opportunities. “The local economy is not supporting business expansions,” he said. “We are looking at other geographical areas for possible work. We recently engaged in the Global Construction Program announced by MBDA. Also, we are looking for possible work in the reconstruction of Haiti as well as other markets.”

Pablo points to MBDA as a significant help in developing business strategies to strengthen his company. “For federal programs, we are required to prepare subcontracting plans and MBDA has helped us. We also look forward to developing a closer relationship as business opportunities arise.”

Pablo currently serves on the board of directors for the General Contractors Association and the Construction Industry Museum Foundation.

He holds a B.S. degree in Civil Engineering from the College of Agriculture and Mechanic Arts of Mayaguez in 1969.

Pablo said, “I am most proud of having a successful business and seeing it grow into one of Puerto Rico’s largest construction companies.”