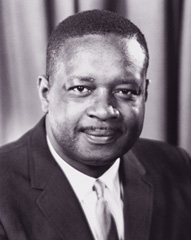 Abraham S. Venable, who oversaw General Motors Corp.’s outreach to black-owned businesses during the 1970s and 1980s after what he called a frustrating attempt to get government to help them, has died. He was 82.

He died on Feb. 21 at an assisted-living facility in St. Paul, Minnesota, according to his son, Douglas. The cause was congestive heart failure.

As GM’s head of urban affairs, a post he held from 1971 to his retirement in 1990, Venable coordinated the Detroit-based company’s programs to increase its business with minority-owned banks, insurers, suppliers and dealerships. GM was then the world’s largest automaker.

He also was vice president of a GM unit known as a Mesbic, or Minority Enterprise Small Business Investment Co., which functioned as a lender to minority-owned businesses.

“Abe was really the face of GM in the African-American and Hispanic communities,” Jim Farmer, a retired former GM vice president who worked with Venable, said yesterday in an interview.

Noting that Venable’s job was created not long after race riots in Detroit and other cities, Farmer said, “I used to call him the eyes and ears. If there was trouble regarding race relations, he made sure the GM executives were involved and listening.”

Ebony magazine, in a March 1974 article titled “Our Man at GM,” described Venable as “a businessman driven by the twin furies of ambition for self and ambition for other black businessmen.”

“I function as a sort of in-house consultant,” Venable said, according to the magazine. “I have been hired by General Motors to make sure all of the minority programs are working well and to make certain that the resources of the corporation are distributed on an equal basis to all persons regardless of race, color or national origin.”

Venable joined GM in Detroit in 1971 after leading the U.S. Commerce Department’s Office of Minority Business Enterprise, which had been created in 1969. He told Ebony that he had left there “exhausted and deeply frustrated in my attempt to change things.” (In a 1977 report to Congress, the U.S. Comptroller General said the Commerce program had “provided few benefits” to the businesses it was supposed to help.)

Douglas Venable said yesterday his father still had reason to be proud of his time in government.

“Dad along with a few other guys were brought into government by the Nixon administration to really start America’s minority business push,” he said. “These were the guys who started the whole thing around the country, and they got the brunt of the resistance to change.”

His work in Washington did provide Venable with material for his 1972 book, “Building Black Business: An Analysis and a Plan.” The foreword to the book was penned by Venable’s friend Jackie Robinson, who had broken the color barrier in Major League Baseball. Venable assigned the profits from the book to form a scholarship fund at Howard University in Washington, his alma mater.

Abraham Sylvester Venable was born on April 10, 1930, in Washington, according to a biography supplied by the carmaker, which was renamed General Motors Co. after its bankruptcy reorganization in 2009. A skilled saxophonist, he earned an undergraduate degree in 1951 and a master’s degree in economics in 1953 from Howard.

After working as a travel agent and public-relations consultant, he joined the Commerce Department in 1963 to help develop programs to assist minorities in industry and commerce.

Following a fellowship at Princeton University’s Woodrow Wilson School of Public and International Affairs, he joined the newly formed Office of Minority Business Enterprise within the Commerce Department, working as deputy director, then acting director in January 1970 and director later that year. He joined GM after one year as director.

According to the carmaker’s biography, Venable toured U.S. military installations in Germany in 1972 on behalf of the Pentagon in an effort to improve race relations. He also took part in a 1973 presidential goodwill mission to Ethiopia, Kenya, Nigeria and Liberia to promote trade with the U.S.

GM elevated his title to executive director of urban affairs in 1982.

Survivors include Venable’s wife, the former Anna Graham; their three children, Stephen, Douglas, and Karen; and one grandson.

To contact the reporter on this story: Laurence Arnold in Washington at larnold4@bloomberg.net