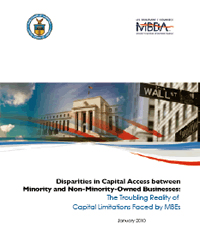 Capital access remains the most important factor limiting the establishment, expansion and growth of minority-owned businesses. Given this well established constraint, the current financial environment has placed a greater burden on minority entrepreneurs who are trying to keep their businesses thriving in today’s economy.

In this study, Dr. Robert W. Fairlie and Dr. Alicia Robb provide an in-depth review and analysis of the barriers to capital access experienced by minority entrepreneurs, and the consequences that limited financial sources are placing on expanding minority-owned firms.

Minority-owned businesses continue to be the engine of employment in emerging and minority communities. Their business growth depends on a variety of capital, from seed funding to establish new firms, to working capital and business loans to expand their businesses, to private equity for acquiring and merging with other firms.

A review of national and regional studies over several decades indicates that limited financial, human, and social capital as well as racial discrimination are primarily responsible for the disparities in minority business performance. Inadequate access to financial capital continues to be a particularly important constraint limiting the growth of minority-owned businesses. The latest nationally representative data on the financing of minority firms indicates large disparities in access to financial capital. Minority-owned businesses are found to pay higher interest rates on loans. They are also more likely to be denied credit, and are less likely to apply for loans because they fear their applications will be denied. Further, minority-owned firms are found to have less than half the average amount of recent equity investments and loans than non-minority firms even among firms with $500,000 or more in annual gross receipts, and also invest substantially less capital at startup and in the first few years of existence than non-minority firms.

The current economic crisis is posing severe challenges for minority businesses to meet their potential of creating 16.1 million jobs and generating $2.5 trillion in annual gross receipts. Existing obstacles to greater minority business success challenge the realization of the American Dream of ownership and wealth creation. Unless immediate action is taken, minority communities will continue to lag behind their non-minority counterparts undermining the ability of the nation to quickly regain its economic footing.

1U.S. Department of Commerce, Minority Business Development Agency, The State of Minority Business Enterprises, An Overview of the 2002 Survey of Business Owners, Number of Firms, Gross Receipts, and Paid Employees (2006).