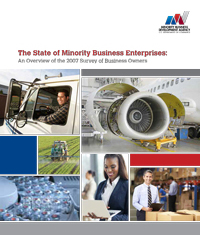 This report, The State of Minority Business Enterprises: An Overview of the 2007 Survey of Business Owners, provides an overview of minority business enterprises (MBEs) operating in 2007 and the growth of these firms since 2002. The report is part of the research generated by the Minority Business Development Agency (MBDA) to understand factors that impact a firm’s performance in order to develop strategies and programs that promote the growth and global competitiveness of MBEs.

Trends in the growth of minority-owned firms, both large and small, are presented in this report through comparisons between all U.S. firms and nonminority- owned firms, taking into consideration the market share of the U.S. minority population. This report also assesses the entrepreneurial parity of these firms, measured by the percentage share of minority-owned firms, their gross sales and paid employees, relative to the share of the U.S. minority population ages 18 and older. The data indicates both positive and negative trajectories as the U.S. economy grew, while homes sales and personal wealth were on the decline.

Minority-owned businesses continued to outpace the growth of nonminority firms in the number of firms and gross receipts between 2002 and 2007.

Entrepreneurial parity for minority-owned firms was not reached in 2007 when compared to the size of the U.S. minority population.

Entrepreneurial parity is a measure used to determine the level of minority business participation at a rate comparable to their proportion of the U.S. population. Parity would be reached when the share of the number of minority-owned firms, gross receipts and employment is equivalent to the percentage share of the minority population 18 years old and older.5

Minority-owned firms were widely distributed among all 19 industry sectors in 2007.8

The data in the report indicates that advancing the economic and financial performance of minority-owned businesses must be a national priority. The state of minority businesses in 2007 suggests this will require expanding opportunities for these firms and convening government, educational institutions and the private sector to develop solutions that effectively enable MBEs to be successful, while addressing barriers to market entry.

The data in this report also surfaces the importance of these strategies for increasing average gross receipts, enabling these firms to hire workers, and, in turn, build more sustainable communities, cities, and states. Moving forward, research that builds upon the state of minority businesses could explore more opportunities to help these firms enhance capacities, increase access to capital and strive towards greater economic parity.

1 “Classifiable firms” are all U.S. firms less publicly held, foreign-owned, non- profit and other firms whose ownership cannot be classified by race, ethnicity, or gender. Classifiable firms include minority and nonminority owned firms.

4 See U.S. Department of Commerce, Minority Business Development Agency, The State of Minority Business Enterprises: An Overview of the 2002 Survey of Business Owners. Washington D.C., August 2006. See more in Appendix A regarding comparisons.

7 Asian firms do not include firms owned by Native Hawaiians and Other Pacific Islanders. Parity may have not been reached by all ethnic groups within the category of Asian-owned firms.

8 The North American Industry Classification System (NAICS) is the standard used by federal statistical agencies in classifying business establishments for the purpose of collecting, analyzing, and publishing statistical data related to the U.S. business economy. The NAICS contains 19 industry sectors at the two-digit code level.

9 The category of “Other Services” includes establishments not provided for elsewhere in the classification system that are engaged in activities such as equipment and machinery repairing, promoting religious activities, grant-making, advocacy, providing dry-cleaning and laundry services, personal care services, and dating services. It does not include public administration.