In 2007 MBDA received a Special Tabulation from the U.S. Census Bureau, which provides actual estimates for all minority firms as "one group" by state. We are currently updating all remaining state profiles not yet listed below with the data from the Special Tabulation and with the adjusted statistics from the 2002 Survey of Business Owners which were re-issued by the Census in September of 2006.  For more information on the source, data methodology and standard errors please visit www.census.gov/csd/sbo/index.html. 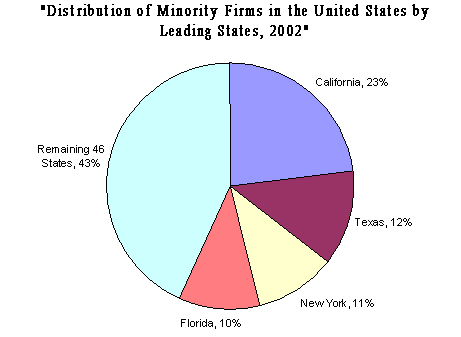 California, Texas, New York and Florida are the top four top states with the largest concentration of minority-owned firms in the nation.

These four states combined accounted for 57 percent of all minority firms in the United States in 2002.

Please find the state profiles below in alphabetical order.